In Conversation with Lolo

Meet the model rocking fashion for all abilities

Lauren “Lolo” Spencer was an active teenager – fashionable, fun-loving, and always on the go. But at the age of 14, she began to develop the degenerative disease Amyotrophic Lateral Sclerosis (ALS) – and the changes in her body meant making other changes in her life.

Lolo was determined that her disability wouldn’t define her, or hold her back. She launched her YouTube channel Sitting Pretty to bust myths about living with a disability, to highlight challenges and to share lifestyle hacks.

“A lot of people may assume that our lives are super-depressing,” Lolo says. “Or that, because we might not be able to move as well as everybody else does, that we don’t live our lives. And I’m just here to prove that to be wrong.”

She covers topics from bathroom equipment to moving home, as well as one of the biggest challenges for people with disabilities: getting dressed. Complicated fastenings, uncomfortable cuts, specific lengths and openings – all can make finding the right clothes a daily hurdle.

Especially when, as Lolo points out, everyone should be able to wear clothes that not only fit, but make them feel good. “People with disabilities have different body types in the same way that others have different body types – and yet we’re the only group of people that aren’t offered fashionable clothes. Adaptive clothing is typically very medical looking, but a lot of people with disabilities still want and deserve to look fly.” 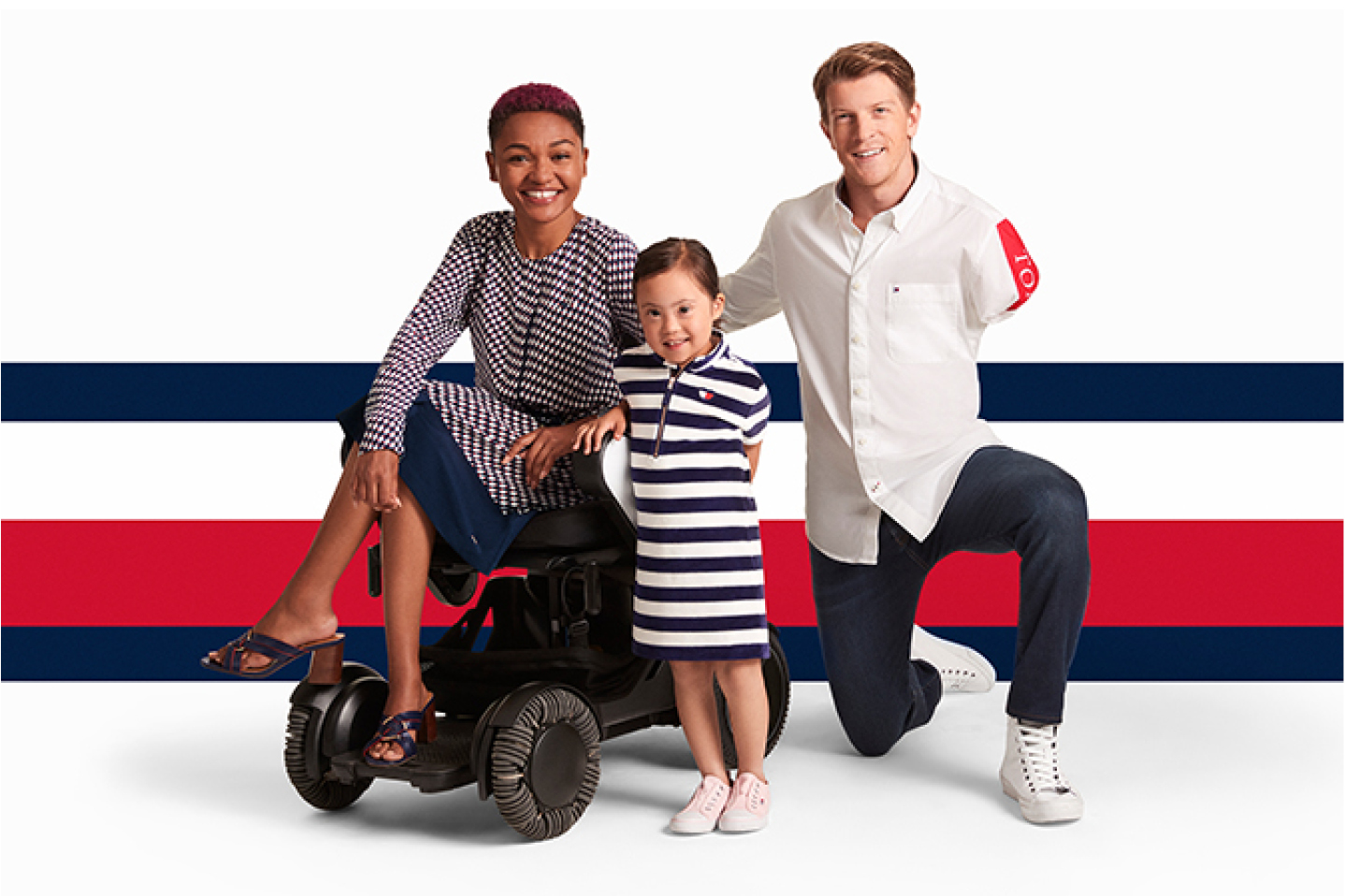 At Tommy Hilfiger, we decided to change this. From speaking to people with a range of different needs, we learned that there are three types of modifications that can make clothing more accessible: closures (using magnets instead of zips and buttons), adjustability (using elastic to alter sleeve and leg lengths) and alternative ways to get clothing on and off (e.g. arms first instead of over the head).

We launched Tommy Hilfiger Adaptive for kids in Spring 2016 and for adults in 2017. Magnetic buttons, adjustable hems and velcro closures mean people of all abilities and body shapes can wear stylish clothes confidently.

Lolo was one of the heroes of the Tommy Hilfiger Adaptive collection, starring in the campaign video alongside Dmitry Kim, a hip-hop dancer with a prosthetic leg, and Miracle Pelayo, an actress with cerebral palsy. The video was directed by legally blind filmmaker and activist James Rath, and includes automated closed captioning and audio description for hearing and visually impaired viewers.

“Tommy made the entire shoot inclusive,” Lolo says, “in front of the camera and behind the camera. It was a safe space. Often, as people with disabilities, we feel like we can’t ask certain questions because we don’t want to be perceived as people who can’t do anything – because we already know society views us that way. But with the Tommy team, there isn’t a question you can’t ask.”

Lolo explains how the Tommy Hilfiger Adaptive line has done more than just make dressing easier – it has helped people feel seen. “People do judge a book by its cover. People often use fashion for that reason: they’ll wear something with a message on it to show what they believe, or an artist on their shirt to show that they’re a fan. Clothes like the Tommy Hilfiger Adaptive line help us show that we are more than how our bodies work – that we have personalities, that we can have a conversation. These clothes mean we can express ourselves in a way that shines brighter than the disability.”

Clothes like the Tommy Hilfiger Adaptive range help us show that we are more than how our bodies work – that we have personalities, that we can have a conversation. These clothes mean we can express ourselves in a way that shines brighter than the disability.

Tommy Hilfiger is among the brands leading the way in accessible fashion, and Lolo hopes that this is just the beginning. “There is a wave slowly happening, but, ultimately, we need to make adaptive styles a fashion standard.

Everyone Welcome
Top Of Page